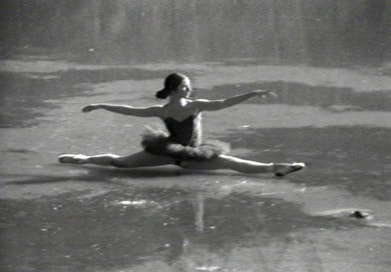 The Dying Swan is a recreation of the acclaimed ballet -- Anna Pavlova's most famous role -- removed from its theatrical context and taken back to the lake.  A frozen pond and fifteen degree weather is the stage and setting for this version of the ballet, and the dancer (Laurie McDonald) in traditional costume of pointe shoes and tutu performs on the ice. The music is from "Carnival of the Animals" by Camille Saint-Saens.