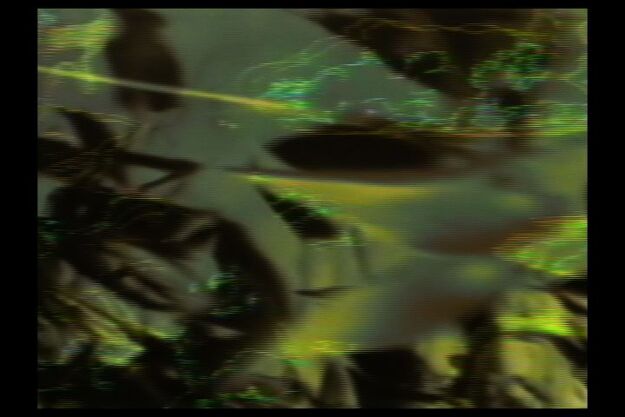 In the year 2020, Hydroglyphs: Early Morning Drift turns forty-five years old. In the video world, forty-five years represents four or five lifetimes of various formats. Over ten years ago, I had transferred the work from a ¾” video cassette—which itself had been a copy of the original ½” reel-to-reel—to a digital DV tape, and the work was barely playable. When uploading it into Final Cut Pro for restoration, there were many times that the tape stopped and started because of breaks in the signal. Of the original seventeen minutes, I was able to salvage about eleven. Pretty good, I thought. A strange, semi-transparent vertical black stripe, taking up about a tenth of the image, wiggled down the left side of the frame and the mesmerizing analog head-switching was a silvery dot that slid back and forth at the bottom of the frame (I concealed these flaws, in Final Cut, by creating a black frame around the image). Hydroglyphs was originally recorded on a Sony Portapak—introduced by Sony to America in 1967—a cumbersome, two piece, black and white camera/recorder that used ½”reel-to-reel tape and whose signal was highly unstable. As my sixty-seven-year-old self thinks back on my twenty-three-year-old self, sitting in a canoe with this expensive and vulnerable equipment, I wonder if it occurred to me that the canoe could have easily tipped and taken the Portapak and all of my tapes to the bottom of the swamp. As I started to re-edit the work in Final Cut, I cringed when I realized how much of the color, definition, and contrast had faded over the years, like a landscape painting hanging on a western wall, damaged by exposure to the afternoon sun. But after all these years, there was still something there, and I embarked on a mission to rescue those qualities.

When I remembered how those images were made forty-five years ago, I cut myself some slack. My cohort and I were interested in the idea of layering video images with various transparencies: we wanted to challenge the flat, one-dimensional quality of the video image. It was an idea vogue at the time, the idea of the “video mix.” In the early 1970s, video mixes were often done as live performances using several black and white cameras connected through a video switcher, allowing the video DJ to blend the images of many cameras at once: the signal sent through a “colorizer” that would separate the signal into its gray scale values and substitute colors for those values. The water-as-subject in Hydroglyphs created a perfect layering medium: the surface of the water, the reflection on its surface, and what’s going on immediately under the surface ­is three layers right there.

I remember the struggle to make those images. Reel-to-reel video technology was notoriously unreliable, and getting the result you wanted was sometimes frustratingly impossible to achieve. In order to layer image upon image, you had to use a tape machine to play each separate clip, send the individual clips to their own monitors, point a camera at each monitor screen, then send those camera signals to a video switcher to combine them. This accounts for the raster lines sometimes seen in the final image. At the time, this cumbersome method was the only way to layer, not at all easy like the layering of images in today’s editing programs. You learned how to time all this activity by feel and with lots of practice; there were no computers or time code generators or automatic controls. And of course, tape machines often created wrinkles in the tapes—thus disrupting the video signal—when you initiated “play” by means of a big mechanical lever. So it was a physical, visceral process that took skill, patience, and a special touch to master. Had slow motion effects been available, I’m quite sure I would have made heavy use of them. The technology of 1975 didn’t allow for the altering of motion or time.

When I consider Hydroglyphs today, I see that the images are in service of the audio, not the other way around. At the time, I had access to a Moog synthesizer with its user-friendly quarter-inch patch cords, voltage controlled oscillators, and sequencers. Working with the Moog’s patch cords was what I imagined being a 1940s telephone switchboard operator was like; the process necessitated a physicality that was really satisfying. The studio in which I worked also had two, four-track two-inch tape machines, so layering of sound was possible. Influenced by the structure of classical Indian music, my compositions started slowly, built a musical story by introducing different motifs and themes, then came to a chaotic, frenzied climax, with a brief coda of the beginning. I wanted the images to follow this pattern and for specific visuals to connote the music, and vice-versa. For example, in Hydroglyphs, the first quarter of the work is spent setting up the scene: a man in a canoe paddles through a swamp. A rhythmic bird call plays off the rhythm of the sound of the paddle in the water. Just when the viewer begins to be hypnotized by this expectation of rhythm and pattern, the visuals become more and more abstract as an electronic music theme, resembling a synthesized, artificial bird sound, is introduced. Added next is music produced in a high register that connotes the delicate, scintillating yellow line that snakes through the image. A sequence of notes suggests the weeds—looking like mermaid’s hair—that flow past the boat.

Does Hydroglyphs work as intended? Given the technical difficulties of video-making during the 70s, I’d say, yes, for the most part. Image and sound create an interplay of both story and abstraction that creates an ineffable, mysterious quality that early video art sometimes suggests. We video artists of the time were striving to make artistic statements in ways never expressed before, thereby creating a sui generis art form. In that context, I think Hydroglyphs succeeds in its intent, is an expression of the 70s video art zeitgeist, and is still watchable today.