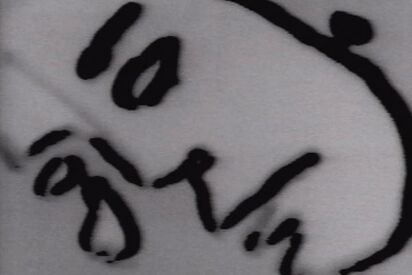 Body Images is an exploration of the television screen as a graphic surface, and movement, line, shape, and time are the elements used as design tools.  Laurie McDonald composed a Moog Synthesizer sound track to complement the rhythmical, pendular camera movement and time-delayed feedback pattern that characterizes the work.

"McDonald's most dramatic work was 'Body Tape' where the lighting was arranged so that body contours and edges received the most intense illumination.  The camera was then swung pendulum-like from above and the tape ran between two decks to effect a brief time delay.  The resultant imagery, reversed so that the body's lit contours became black lines, was like a Matisse drawing come alive.  Time-delayed pictures recurred and faded behind the primary image, increasing the rhythm and grace of an already powerful graphic drama.  Images were at once extremely abstract--like Matisse's simplest sinuous line--and photographically real; and hovering continuously between these two perceptual levels, they created a video poem of startling lyricism."
- Carol Zemel, Artscanada's "Issue of Video Art", October 1973