In 1980s America, surveillance cameras began appearing in public spaces -- any place where there was a possibility of a crime being committed -- simultaneously challenging our right to privacy and actuating our fear that George Orwell's prognostications in his book 1984 were manifesting.  In 1984, everyone is connected to Big Brother by means of a television system that resembles today's cable TV, and anyone can be watched at any time without their knowledge or consent by this "man-like machine".  Surveillance cameras create a technological confinement from which there is no escape.  Orwell's warning, best summarized in 1984's afterward by Erich Fromm, is that "unless the course of history changes, men all over the world will lose their most human qualities, will become soulless automatons, and will not even be aware of it."

The installation Surveillance challenged these notions with the cooperation of an institution that was an early adopter of surveillance technology:
a bank.  Installed near the West entrance to the InterFirst Bank on Congress Street, in Austin, Texas, a white Florentine marble laminate-covered enclosure housed four large television monitors, mimicking the look of a bank information kiosk and thereby creating a visual decoy for bank customers.  Three of the monitors displayed images gathered from public places that typically utilize surveillance equipment, and the fourth monitor displayed the image, via a live camera, of the viewer looking at the work.  Although three of the monitors displayed prerecorded images, the effect suggested live cameras transmitting images from various locations, convening at a terminal installed at the bank.

The juxtaposition of images of people looking at newborn babies, labeled "Nursery", with people greeting arriving passengers at the airport, labeled "Airport" demonstrates that people are oblivious to the presence of a camera when they are in a state of intense emotional focus.  The effects of directing this "man-like machine" at random individuals illustrates that surveillance technology does not rob human beings of their "most human qualities" and create "soulless automatons" as a result.  By viewing Surveillance, It was hoped that the viewer rejected Orwell's negative Utopia, describing a mood of hopelessness and powerlessness, and in spite of the alienating features of our culture, enjoyed these life dramas that are
​positive forces in people's lives. 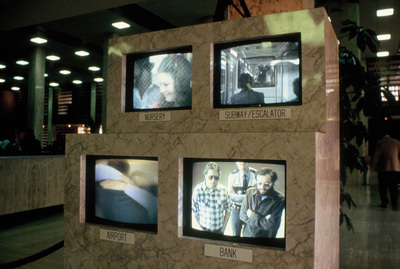 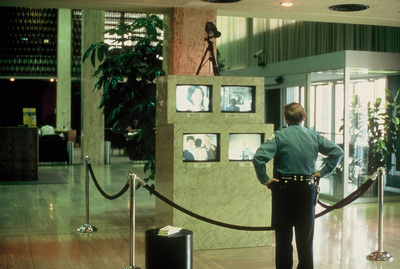 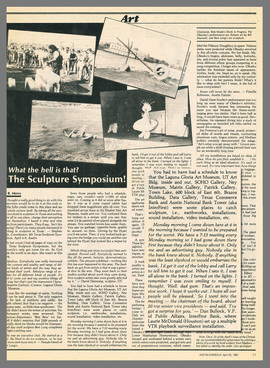