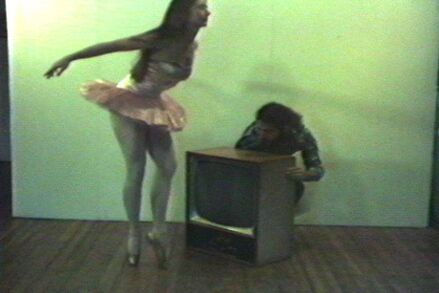 A magnetic "dancing" ballerina toy, found by Bob, inspired this video of a real ballerina (Laurie McDonald) spinning as if the magnetic coils in an old black and white mid-century Setchell Carlson television monitor were controlling her movements.  Spinning Balleria is part of a collection of dance videos by Laurie McDonald, in collaboration with the Electron Movers, including: The Dying Swan, Deux Pieds, The Sleeping Beauty, Minute Waltz, and Deus ex Machina, and a later work created in Houston called Duet for Tap and Galoshes.