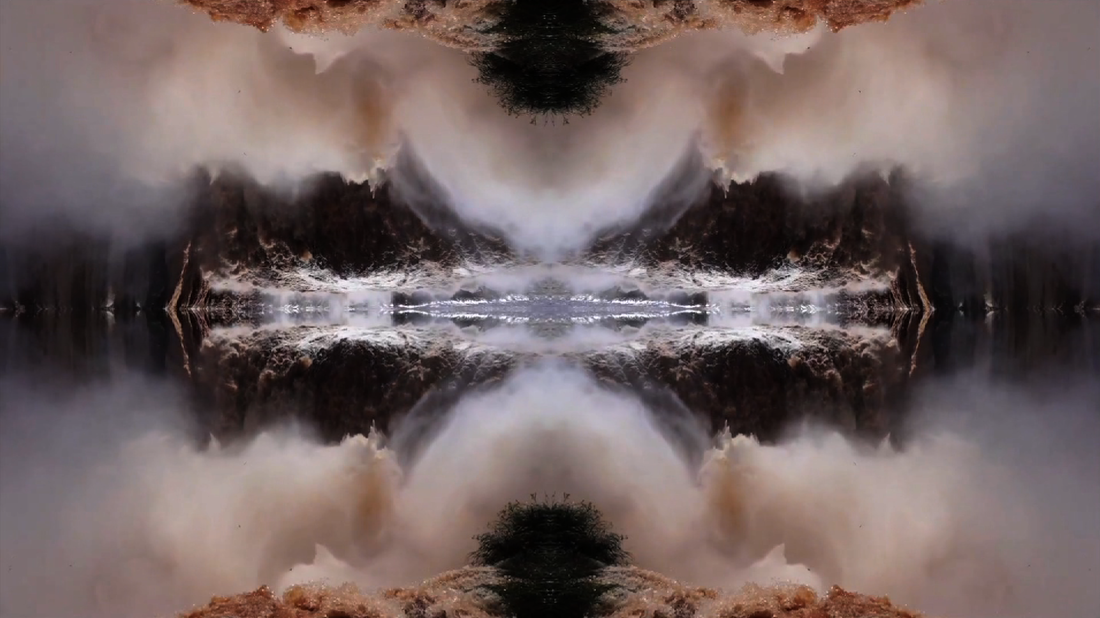 As profecias da Orixá Oxum (The Prophecies of the Waterfall Spirit Oxum) was filmed at Iguaçu Falls, Brazil/Argentina, and is intended for viewing in Virtual Reality. The intent of Prophecies is to transport the viewer to an alternate reality that exceeds the boundaries of the everyday visual experience, evoking faces, emotions, the visualization of sound waveforms, and mystery. Images of the various waterfalls were manipulated to create a quadra-spatial symmetry—four versions of the same image rotated, flipped, and combined into one—so that the images seem to travel both inward and outward, unfolding and contracting from edge to center, from the pictorial to the abstract. The center, where these four images converge, suggests a mandala's symmetrical, balanced center around which everything is arranged.

In the Brazilian syncretic practice called Umbanda, Oxum is a female goddess associated with harmony in relationships, with sensitivity, and is a reminder to men that anything they attempt to do without women will fail. The Orixá Oxum is identified with waterfalls, rivers, and fresh water. Practitioners of Umbanda, which originated from indigenous animism and was blended with spiritual practices from Africa and Europe, recognize an animating force that pervades all of nature, and certain orixás (similar to the Catholic saints) are identified with specific natural phenomena.

While the work is not to be identified with any religious belief, it takes inspiration from the Orixá Oxum. Here in the New Mexican desert, we are acutely aware of the power and mystery of water and of life’s dependence on water for survival. Taller than Niagara Falls and twice the width, the rate of water flow at Iguaçu Falls can reach 450,000 cubic feet per second, the greatest of any waterfall in the world. By its sheer magnitude and awesome size, Iguaçu Falls is a reminder to those of us living in the desert of our tenuous relationship to water and our absolute reliance on it. The last image in the film is intended to suggest Oxum’s face in the falls and her prophecy: a message to the viewer about the world’s changing relationship to water as a result of global warming.