Sylvanscapes was a site-specific, kinetic sculpture created from three, hundred-foot lengths of clear, flexible plastic tubing containing a chemiluminescent chemical (brand name: Cyalume).  The tubing was woven through the trees, rocks, and bushes of the Ames Theater Trail at Artpark, its light creating a delicate drawing in light throughout the woods.  The public was encouraged to reconfigure the placement of the tubing, making their own creations in light.  The following night the tubing was placed in the Niagara River at a point of great turbulence.  Currents and eddies pulled the glowing lines under water, causing the light to be diffuse, and released them to float back up to the surface.  Hundreds of small fish were attracted to the light and were visible swimming in its glow.  Viewed from a cliff high above the river, Sylvanscapes resembled a kinetic, luminescent drawing whose lines varied in width and focus.

The two chemicals required to create luminescence were available for purchase from Cyalume's manufacturer in six inch-long plastic tubes only.  Prior to the first night's installation, Laurie and Michael spent all day cutting each tube open and pouring its contents into the hundred foot lengths, a painstaking process.  Based on the chemistry of a firefly, a Cyalume contains two chemicals: an “activator” and an oxalate encased in a small glass ampoule.  When the Cyalume is bent, the ampoule breaks, and when the tube is shaken, the chemicals mix and fluoresce.  The resulting mixture is a hydrogen peroxide-based chemical that glows with a greenish-yellow color.  Sylvanscapes was inspired by tiny bioluminescent sea creatures that Laurie encountered one summer while swimming in the Gulf of Mexico. 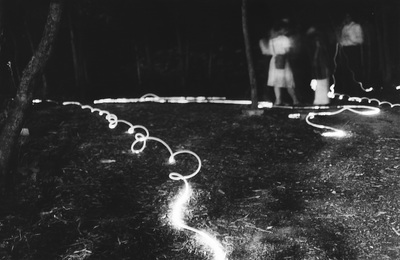 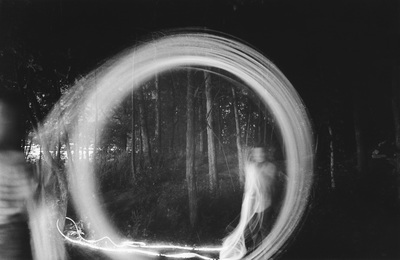