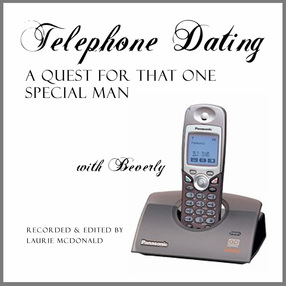 Telephone Dating: A Quest for That One Special Man, 2003
with Beverly; intended for radio; excerpt 10:05; original running time 30:13

Edited from over seven hours of interviews with Houstonian Beverly, Telephone Dating: A Quest for One Special Man is about the oftentimes frustrating search for one's soul mate, a process that begins with reacting to the sound of a stranger’s voice.

At the aural stage of the dating process, Beverly realized much success.  She was told by those who listen to her dating profile that she is sexy and sensual, that she is a goddess, that she is the class act on the system.  Men have offered to be her slave, to wash her dishes, to shave her legs.  However, these dubious declarations of love are based primarily on the sound of her voice, not on the content of her profile in which she clearly states she is a 50 year old “plus-size or queen-size woman”.  Most men who respond to her profile stubbornly cling to their fantasy image of Beverly as a slender, athletic woman with long hair and big "boobs.”  In Beverly’s words, men are practically drooling over the phone, but when they see her in the flesh, there is a different response altogether.  Before the initial meeting, where face and body are joined to voice, Beverly is anxious and frightened because rejection is the norm.  Worse, some take advantage of her vulnerability.  In a date with a dentist she calls Dr. Dandy, what starts innocently enough with dinner and a Coke develops into a potentially dangerous encounter.

Beverly reflects on the idea of telephone dating and concludes that she has “a face designed for radio.”  It’s human nature to want to be cared for, to feel a sense of belonging, and to want to be made to feel special.  But the men who have responded to Beverly’s voice cannot reconcile their Pamela Anderson ideal of the One Special Woman with reality.  Because they cannot see into the heart of a truly good person, Beverly’s quest ends without success.